By Doug Oakley
Staff Writer
Bay Area News Group East Bay
doakley@bayareanewsgroup.com
How many artists are making petroglyphs these days?
The answer is probably not many. Kevin Sudeith, however, has it covered.
The Minnesota native has been grinding, cutting, hacking and painting a rock built into a Berkeley garage for four months now. The privately commissioned work, like petroglyphs from ancient times, shows iconic images from the area: a BART train, a sailboat, an ocean freighter. 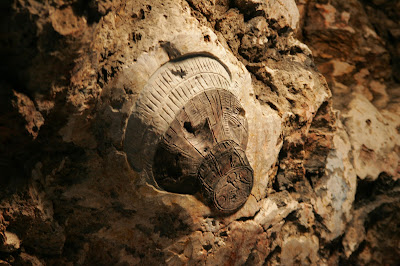 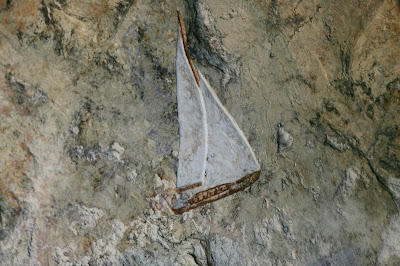 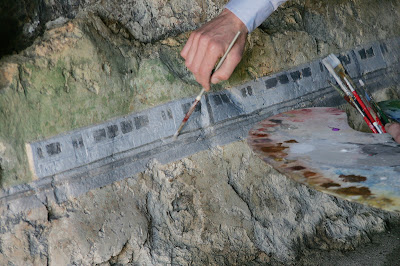 One year ago, Sudeith jammed all his belongings from his New York apartment where he'd been living the past 17 years into a shipping container and began his travels.
Before arriving in Berkeley in November to weather the winter, he meandered the country for almost a year, camping out with his tools, making art that will last a long, long time.
Sudeith, 46, has been in North Dakota, Montana and Colorado getting commissions on private land for people who like the idea of pictures set in rock.
"I can't make a convincing argument to myself to get an apartment," Sudeith said. "Dispatching my personal property to a container was very liberating. I wanted to make carvings. It's physically demanding, and I thought I should do it while I am most able to, while I'm young and foolish enough to do it."
Sudeith said he wanted to be a petroglyph maker since he was 21, when he visited northwest Australia and saw 40,000-year-old rock paintings of fish and other figures beside newer ones that showed white men on horseback with guns and cowboy hats.
"The contrast of the super-old with the contemporary was just awesome to me," Sudeith said.
After getting bachelor's and master's degrees in art, he taught himself to grind, chisel and paint the rock he's working on, and he invented his own technique.
"I like making a durable document of art and documenting our contemporary technology," Sudeith said.
When he was in Colorado doing some outdoor work, he carved into rock various cars that a man had parked on the property "because I could tell that the cars were somehow part of the guy's identity," Sudeith said.
And while working in North Dakota he ended up carving an International Harvester grain hauling truck on a headstone -- the deceased man's favorite truck. He said when he does a commission for someone, like older petroglyphs, he just incorporates things from the area.
In North Dakota he also carved farming equipment and oil rigs. In Colorado it was ranching, wild game, satellites and cowboys. In Berkeley, Sudeith is making impressions on paper of his work from the garage and hoping to sell them at an open house April 30 and May 1 from 10 a.m. to 8 p.m. The address is 1959 San Antonio Ave.
Doug Oakley covers Berkeley. Contact him at 510-843-1408. Follow him at Twitter.com/douglasoakley
Posted by Doug Oakley at 6:37 PM